Retail Report: Wind in Our “Sales”

This time last year, we were all becoming acquainted with #masklife, solitary quarantines, and exclusively online shopping. We wondered: How long would this last? Would life ever be the same? The uncertainty was palpable. Now, one year later, our research shows that retail is resilient, showing signs of positive growth. As mentioned in our blog in May 2020, brands needed to adapt to meet new consumer shopping habits to be successful. Retail saw a 9% decrease in March 2020 – so what’s contributing to the growth in 2021?

Stimulus checks and vaccinations have led to an increase in consumer comfort. Consumers are more likely to go out and spend money if they feel healthy physically and mentally (referring to their lack of fear of getting sick and comfort with spending disposable income).

With February’s weather being quite miserable, consumers were kept inside (on top of the pandemic effects). This caused a decrease in month over month retail sales from January to February. But remember, January’s increase was higher than expected. And while only grocery stores (+0.1%) and gas stations (+3.6%) showed month over month increases in overall sales, nearly every category was up notably against last February.

Daylight Saving Time is good for the economy, proponents say. Later daylight means more people shopping after work, increasing retail sales. The golf industry reported that one month of DST was worth $200 million to $400 million because of the extended evening hours golfers can play. The barbecue industry estimated their profits increased $150 million for one month of DST. In 2007, an estimated $59 million was saved because fewer robberies were committed thanks to the sun being up later.

There are currently two bills in Congress (although neither has seen much daylight yet) to make DST the law of the land year-round.

Employment Still Has a Long Way to Go…

Total nonfarm payroll employment rose by 379,000 in February, causing the unemployment rate to inch down from 6.3% to 6.2%. This is still substantially above last February’s 3.5%. At the current rate of growth, it will take more than two years to return to pre-pandemic levels. Moreover, when looking at changes in the labor force year over year, it is clear that minority women have been most affected. 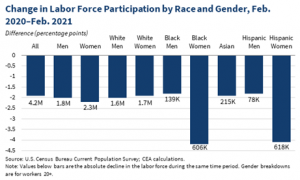 About the Author: Gina Partite

Gina wears many hats at Marketsmith, but her most important one is serving as the conduit between clients and agency teams. She coordinates campaign activity, including client communication, presentations, and campaign strategy. Gina also plays a critical watchdog role, making sure deadlines are hit and client requests are met, and that both campaign performance and account management are consistently knocking it out of the park. Gina has a harder time stepping away from the computer than most Marketsmith employees as she’s a self-described online shopping addict. “Send all your retargeting ads to me with the highest frequency and I will convert.”