The third installment of the series focused on the theme of “Building Connections.”

The event, emceed by Alison G. Yablonowitz, partner, assurance services, at EY, and moderated by Monica C. Smith, founder and CEO of Marketsmith, attracted a room packed full of women leaders, sparking conversations on a range of topics, including the importance of passion, vulnerability as a leader, advocating for yourself and more.

Article from roi-nj.com below 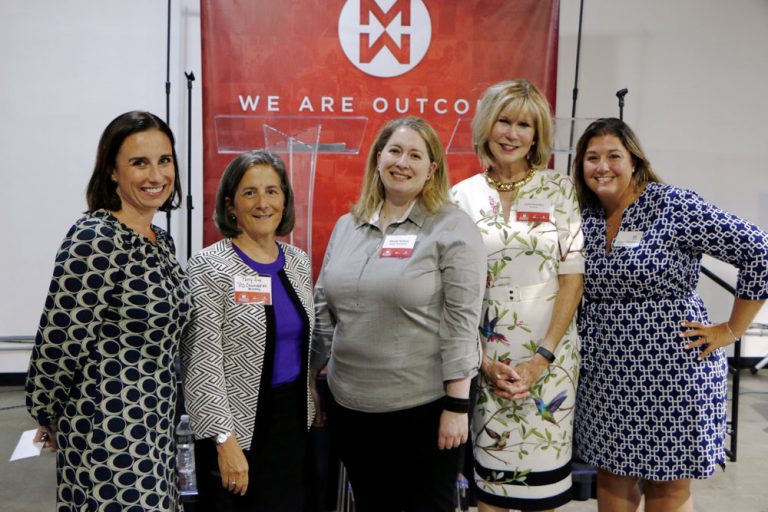 In a response for better networking events for women executives in New Jersey, two New Jersey-based companies have come together to elevate the conversation.

EY’s Professional Women’s Network has partnered with Marketsmith Inc. to create the Women’s Empowerment Series, a series of events focused on bringing together top executive women in the state for networking, learning and empowering conversations on topics related to professional and personal growth.

The third installment of the series, which was held at the Marketsmith warehouse at 2 Wing Drive in Cedar Knolls, focused on the theme of “Building Connections.”

The event, emceed by Alison G. Yablonowitz, partner, assurance services, at EY, and moderated by Monica C. Smith, founder and CEO of Marketsmith, attracted a room packed full of women leaders, sparking conversations on a range of topics, including the importance of passion, vulnerability as a leader, advocating for yourself and more.

“I need to talk to somebody, because I don’t want to be isolated on my journey as a CEO,” Smith said when discussing how her team and EY came up with the theme of connections.

“I think it’s important for us to come together and lock arms. … We just need to know the more we stick together, the less we judge, and the more we share, the better it will be, not only for us, but for our daughters and those that come way after us,” Smith said.

Each panelist focused on how connections have deeply impacted their personal and professional lives.

Here’s what they had to say:

Sly, who’s done mission work almost her entire career, was raised to believe that professional excellence is about competence, hard work, integrity and making your personal life separate from your career.

The notion of making connections was not on her radar back then, and she admits the value of it was lost when she was just starting out.

“I had to learn it throughout my career,” she said.

When she experienced for the first time someone articulating to her that the personal connection she had made with them was what made the difference between selecting her proposal over someone else’s, it finally clicked.

“I have increasingly embraced the notion of professional warmth,” she said. “I have shown more of myself to people and done so with increasing comfort. And what that’s done in turn allowed me to learn more about the people I work with and interact with. And that’s very rewarding.”

Looking back at what she’s learned, she said the power of vulnerability is also key.

“What I mean about vulnerability is being open and being somewhat vulnerable to exposing who you really are to the people you’re meeting and who you might not yet understand. And to see what possibilities come your way.”

There’s hope on the horizon for a more connected experience with the people we work with, according to Holland.

“Often times, we end up in a position you might feel like stopping or say ‘This is as far as I can go’ — example: being burnt out from work — and, by walking into those connections and meeting people, they will help pull you up and you will help pull them up, because there is no limit.”

A support system at work is of utmost importance for women in the workplace, she said, and there’s no reason to be isolated. That’s where those top-tier connections come into play, creating a learning environment for everyone from the intern to the CEO.

“We should be each other’s support system instead of competing. … You can still do good things, be passionate, be a good person and get ahead and be very successful, and bring people with you, and continue that payback. That’s what connection is.”

Although there to discuss the theme, Bowden started listing off women business statistics:

“You can judge whatever you want from that,” she said. “What I take from that is, yes, we’ve come a long way, but, boy, we have a long, long way to go.

“I further would posit to you that the way we’re going to get there is to continue to support each other.”

On many occasions, connections have helped advance her career, Bowden said. But, on a deeper level, they also have provided her with psychological support — especially when women are involved.

“When I look at the happiest times in my career and the darkest times, very often, it was either because of having, or lack thereof, female support in the workplace.”

When she graduated college and began her career as a teacher, she said she was troubled by the lack of meritocracy. So, she found an interest in the financial industry and connected with a colleague’s husband who was a banker. Within three weeks, she was offered a job, but with that came an abundance of stress and nervousness.

“I was fearful all the time,” she said. “And, in fact, frankly, for the first probably 20 years of my career, I was very afraid. I really did have that imposter syndrome. I didn’t have the confidence in myself.

“What helped me was the network of women. It was the connections that I made.”

So, what does this all mean?

She homed in on never putting herself last. She said she should have reached out more and made more connections.

Bowden began practicing what she was preaching, and things started to change.

“Women can immediately upon meeting each other get down to the most intimate and basic details of our lives. And I think that’s terrific. Because, what that did for me allowed me myself to relax and it allowed me to stop being so fearful. It allowed me say: ‘You know what? Other people have the same kinds of concerns.’

Connections have indirectly helped her career, she said, because she finally started having confidence in herself and it was because of the support from other women.