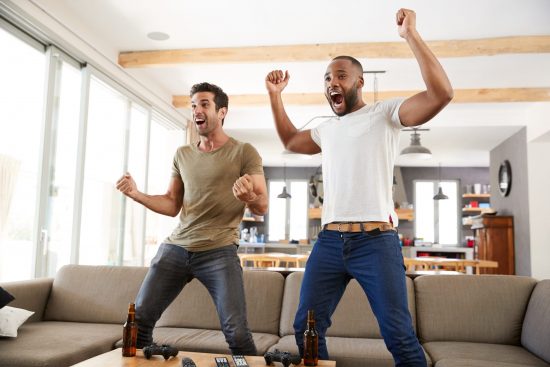 On Sunday, February 7, at 6:30 pm, most Americans will turn their attention to CBS to watch Super Bowl LV (55). The Kansas City Chiefs and Patrick Mahomes are setting their sights to win back-to-back Super Bowls against a guy named Brady (who has won the Lombardi Trophy a record six times), attempting to do it with a new team this time, the Tampa Bay Buccaneers. There is a lot at stake for this Super Bowl; for one, there will only be 22,000 fans in the stadium, with 7,500 of them being health care workers. Also given the current news cycle, filled with rising coronavirus cases, growing unemployment numbers, Capitol violence, a new president, and impeachment round two for a former president, it’s safe to say anxiety levels are rising for more than just the NFL and its players.

Super Bowl LV brings a very strong debate: Should you invest the $5.5 million for a 30-second spot? Is this the most underrated or overrated spot in TV? Will the audience still be as engaged as previous years? In years prior, I’d argue it was an underrated spot, as the audience watching the game was supremely engaged during the commercial break; it was a moment in time when brands had the opportunity to speak to consumers directly. However, it appears that the audience may look a little different this year. Add on the fact that NFL ratings were down 7% for the season, marking the first decline in three years. After two years of ratings growth, the audience for the 2020 17-week regular season games dipped across all broadcast and cable networks. According to Nielsen, the 2020 regular season averaged 15.4 million viewers (live + same day).

Super Bowl Viewership Has Declined Since 2015 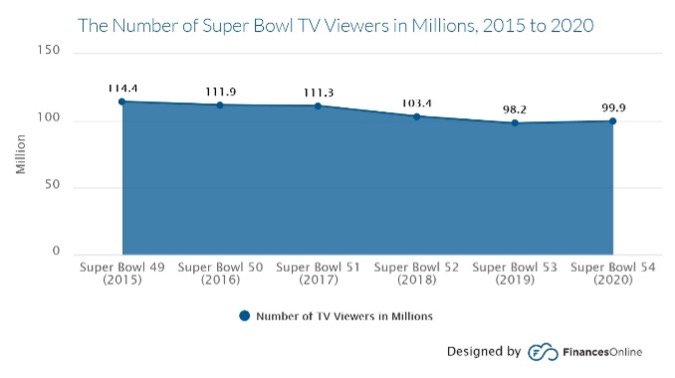 Some Brands Sit Out the Big Game, Some Go All-In

For the first time, the brands sitting out the Super Bowl have been bringing as much buzz as the gutsy marketers who are putting up the $5.5 million to participate. Advertisers like Budweiser, Avocados From Mexico, Coca-Cola, Hulu, Ford, Hyundai, Pepsi-Cola, Sabra (remember “How do you ’mus”?) and others have already taken a seat on the sidelines. But this also brings opportunities for CMOs who are looking to make an immediate impact with their brands. Huggies has confirmed that it will debut a brand refresh at the Super Bowl this year, making it the first diaper brand ever in the Super Bowl. Hellmann’s is taking on food waste in their first-ever Super Bowl ad, featuring famed comic Amy Schumer. Some advertisers are using the massive platform to establish new marketing positioning like food-delivery service DoorDash, who will run its first Super Bowl ad this year. E*Trade is back in the Super Bowl after a two-year hiatus, and the mystery guest known as #FlatMatthew mentioned in Doritos’ first Super Bowl teaser is none other than ad land darling Matthew McConaughey (alright, alright, alright)! Commercial teasers leading up to the Super Bowl are a major part of the strategy to build up frequency of the creative prior to the massive reach it will obtain on Sunday.

To date, there has been a blend of familiar brand participants (Anheuser-Busch, Frito-Lay, M&M’s, Mountain Dew, Pringles, Toyota, Squarespace and TurboTax) mixed with up-and-comers that have thrived during the pandemic, like Fiverr and Vroom, who will join the lineup for the first time, using the Super Bowl to provide a platform to take their brand awareness to an entirely new level. And now, TikTok competitor Triller is allegedly joining in, reports Ad Age. Will the audience respond to these live spots? For the likes of Fiverr and Vroom, it is essential that they supplement their live spot with teasers and storylines on social to gain more buzz.

Who Will Emerge as the Most Talked-About Brand?

Former New York Times advertising columnist Stuart Elliott stated it best that “the Super Bowl is going to require a real gut check for marketers in terms of whether they’ll be able to walk the tightrope between striking the right tone and misfiring by alienating people with the wrong approach.” We will have to wait and see till Sunday if the big bet pays off for these advertisers. So, who do you have winning? No, not the game – the important part – which brand will have people talking post-Super Bowl LV?

About the Author: Rob Bochicchio

Rob joined Marketsmith in 2017 after more than 20 years of crushing it at New York City ad agencies in support of a long list of name brands. Rob’s broad executive experience encompasses client service, strategy, investment, business intelligence, operations, and new business development. Marrying data and analytics to strategic planning has been Rob’s recipe for success. He also has a flair for sniffing out opportunities and new partnerships to fuel agency expansion. His cross-functional leadership and 20,000-foot view of the business have been essential to Marketsmith’s growth. Rob has continually encouraged the elimination of siloes and the blending of skills and perspectives across our organization. Rob has had led the charge in driving agency productivity and keeping costs down, while remaining singularly focused on client goals. He is a tireless proponent of data science and using it to identify new markets, develop strategies, and optimize all of our campaign work to achieve top line results. After earning a business degree at St. John’s University, Rob began his media career in New York, first as a broadcast director, and then as a founder and executive of a nationwide media company. Rob joined Marketsmith in 2017 and maintains his ongoing devotion to New York City’s Gilda’s Club, a non-profit with a mission to support, educate, and empower cancer patients and their families. Rob has served on their Board of Directors since 2012. Outside of agency and philanthropy commitments, Rob enjoys traveling the world with his wife and two daughters.